On October 14th, Beijing time, Changchun Yatai drew 1-1 with Sichuan Youmusic, and advanced to the super group with the first group. After the game, head coach Chen Yang attended the press conference. 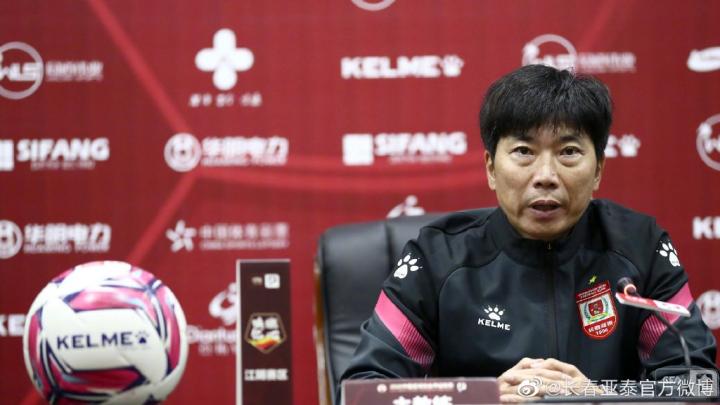 We dominated the game for 30 minutes in the first half. The whole team followed the pre-match deployment, not only to win the game but also to show the strong team's control during the game. Several opportunities were created in the first 30 minutes. Offensive speed and offensive and defensive conversion speed are what the team must insist on. But with the decline in physical fitness, the gap between the midfield and the backcourt increased, and a mark-to-man error in the penalty area caused a loss in the second half.

In the course of the game, when there is a dominant and when it is relatively passive, I am very satisfied that the players can go all out to tie the score when passive, and even have a chance to score. But we also see that we are not strong enough to truly control the 90 minutes of the game. We also need to unify our minds and turn the advantage that determines the game's victory into a victory when we control the game. In certain periods, all players must defend, even if the scene is passive, they must not concede a goal. This is where everyone is very unified today.

Today is to restore Aaron to the game, even if the score is not behind, he will be given 30 minutes in the second half. It happened that the score was behind during that time period. Just like the pre-match plan, Aaron was put on the field to restore him to the game and to be familiar with the cooperation with his teammates and the team's requirements. He also created a penalty kick and made a free throw, which was a good help for him.

We are a strong team, but I also said on the field, everyone should not forget the process for a happy ending. I am here to solve difficulties. Everyone supports my work very much, and the players can trust me in their daily work. Everyone in China unified their thinking and gradually improved their style of play. Through today’s first half of the game, I saw that the team has a unified rhythm of offensive and defensive transition, but after all, it is the tenth game. The decline in physical fitness in the second half is the key point for us to determine the outcome of the game, so Also prepare for the second stage in the next 10 days of work to give the players a good mental and physical reserve.